Our COVID-19 essential service is operating as normal during lockdown. We'll be shortly contacting our shielding and vulnerable customers with details of our contactless free delivery service.

What is a Pre-Workout drink?

Pre-Workout products deliver a variety of functional ingredients to help improve mental focus and performance. They are popular with gym users and team sports players but the concepts and functional properties are also slowly becoming more interesting to endurance athletes. Many people use them as a “pick-up” to gain motivation after a long day at work and to get in the mood for exercise. RAW Pre-Workout ™ has been designed with all these user groups in mind.

Pre-Workout drinks vary in their content and effects. Most have some type of Nitric Oxide pathway activator usually in the form of Arginine and nearly all contain caffeine. They have risen in popularity over the past few years but not without controversy. Certain products have been removed from sale due to them containing banned substances, these products were generally seen to be “buzz” products that contained amphetamine like substances such as 1,3-dimethylamylamine (DMAA). Manufacturers of such products were falsely claiming that these dubious ingredients were derived from plant sources - such as Geranium root extract, but such products were not proven to be safe and a major issue for competitive athletes subject to drug testing. DMAA has now been banned from many countries including the UK and USA. Other questionable ingredients have since emerged that taint both the image of the sports nutrition industry and Pre-Workout products in general.

As you would expect from Real Nutrition Co, when developing RAW Pre-Workout™, the aim was to manufacture a powerful “all in one” product that was both safe and ethical. This was achieved after 18 months of development and resulted in the first Pre-Workout to utilise all natural flavourings and sweeteners. RAW Pre-Workout™ is a highly effective Pre-Workout drink delivering potent levels of ingredients in a naturally formulated drink.

Real Nutrition Co included Creatine and Beta-alanine in the formula due to the abundance of scientific data to support these ingredients. Creatine is categorically proven to improve performance in short burst exercise like weightlifting and sprinting. The finest 99.99% pure Creatine monohydrate is used in RAW Pre-Workout™ as this type of Creatine is supported by the most abundant volume of research to facilitate its performance enhancing effects. It is an urban myth that Creatine monohydrate creates bloating - at least not when you use an ultra-pure, high quality source as in RAW Pre-Workout™.

Beta-alanine is a non-essential amino acid, however it may be anything but non-essential from a performance point of view! Beta-alanine is a precursor to Carnosine. Carnosine is important because it helps to keep the muscles from becoming too acidic. Nearly 20% of the muscles pH buffering capacity comes from this compound and Carnosine levels are limited by the amount of Beta-alanine the muscles have available. Muscles function best in a very narrow pH range and exercise can quickly cause an increase in the acid level of your muscles. When this happens (acidosis), muscular performance suffers and muscle cramps occur more frequently. Furthermore, if the pH drops too low, muscles can stop working completely. So, keeping the muscles in an optimal pH range is obviously important. Staying in this optimal range allows the muscles to keep contracting at the same power level for a longer duration, enhancing strength, speed and endurance

So why not just take Carnosine? Carnosine is digested very poorly. When ingested, the body breaks it back down into Beta-alanine and Histidine. The body then synthesizes it back into Carnosine again. Since the body already has plenty of Histidine it makes much more sense to just take Beta-alanine.

Thermo-Focus™ is a special herbal blend of Raspberry ketones, Guarana seed extract and Ginseng. Additionally, Thermo-Focus™ contains Caffeine, L-Tyrosine and Glucuronolactone for a mental and physical boost together with B Vitamins that contribute to energy and fat metabolism.

Real Nutrition Co have blended Caffeine with Guarana to deliver an optimum stimulant content in RAW Pre-Workout™. Guarana is extracted from a berry seed that has been used for centuries in South America. Guarana contains a high amount of guaranine, a chemical substance with the same characteristics as Caffeine alongside other components, including the stimulants theophylline and theobromine. Also, other components of guarana help to slow the release of Caffeine into the bloodstream which help to maintain its benefits. It is this blend in RAW Pre-Workout™ that delivers a feeling of sustained energy and not a sharp rise and fall as experienced when only using Caffeine alone.

Another key factor to consider when dosing Caffeine is the vasoconstrictive properties, which can limit nutrient and oxygen flow to the muscles if taken to excess. The total level of caffeine has been optimised to provide maximum benefits but balanced at levels that compliment the other nutrient groups, specifically the nitric oxide precursors in Nitro-Pro™ (which enhance blood flow). Most Pre-Workouts totally underestimate this interaction with unnecessarily high doses of caffeine. Although caffeine is a safe stimulant that is found in coffee and other beverages, it is not recommended to take more than 750 mg per day.

N-Acetyl-L-Tyrosine (NALT) - is an acetylated derivative of the non-essential amino acid L-Tyrosine. Due to the acetylation it is suggested that NALT is more rapidly absorbed and bioavailable than L-Tyrosine, meaning it can have a more profound effect. L-Tyrosine is often used to heighten mental alertness, increase feelings of well-being and offset physical and mental fatigue, particularly during heavy exercise. It also has an antioxidant effect, helping to protect cell membranes from the damage caused by reactive chemicals called free radicals.

Raspberry ketones - are chemical compounds found in raspberries that are responsible for the fruity smell and flavour. The chemical structure of raspberry ketones are closely related to a number of components found in other plants used in promoting fat loss such as Capsaicin (the 'hot' part of chilli peppers) and synephrine (derived from bitter orange peel). Both ingredients increase metabolism, but may have unwanted side-effects such as irritation of the stomach. In scientific trials raspberry ketones are shown not to have such effects. Raspberry ketones increase the production of hormones which raise the temperature of the body,  thereby increasing metabolic rate and fat burning. Overall, thanks to its natural origins and lack of side-effects, raspberry ketones are an ingredient that can be safely used by almost anyone who wants to experience its fat reducing benefits.

Most pre-workouts contain some form of Arginine most commonly L-Arginine.  The ultimate reason for this is that Arginine plays a central role in the production of Nitric Oxide (NO) which has many potential influences on performance.  AAKG has the advantage over regular L-Arginine in that it much more bioavailable to the body.  Lets explore Nitric Oxide in more detail to understand the role these three ingredients play in RAW Pre-Workout™.

What is Nitric oxide?

Nitric oxide (NO) is a potent signalling molecule that influences a wide range of physiological responses. Possibly the most interesting response for sports and exercise is vasodilation (widening of blood vessels) which improves blood flow to muscles.

How is Nitric oxide produced?

It was traditionally assumed that NO was derived exclusively via the nitric oxide synthase (NOS) pathway. This complex reaction requires the oxidation of L-arginine in the presence of numerous essential substrates including Oxygen. The NOS pathway is fuelled by the Citrulline Arginine cycle and is why RAW Pre-Workout™ contains Citrulline to deliver a two phase fuel source for this cycle alongside AAKG. More recently it was discovered that consumption of dietary Nitrates (NO3) leads to NO production via a different mechanism.  Dietary Nitrates can be consumed from many foods in varying levels. The vegetable Beetroot is particularly rich in dietary Nitrates, RAW Pre-Workout™ contains a special concentrated beetroot extract.  One of the key differences in these two mechanisms is that the NOS pathway requires Oxygen to be present (Aerobic) whereas the dietary nitrate pathway is oxygen independent (Anaerobic). The simplified diagram below shows both Nitric oxide (NO) producing pathways in action. 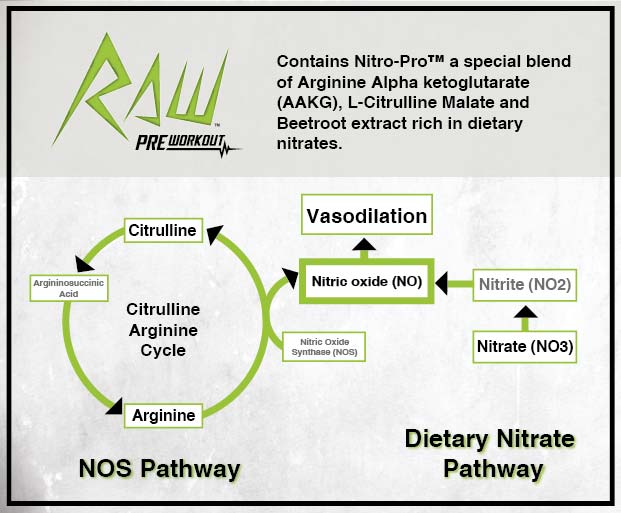 So as you can see the unique Nitro-Pro™ blend in RAW Pre-Workout™ is an advanced combination of highly researched ingredients that support Nitric oxide production.

RAW Pre-Workout™ contains a high dose of Vitamin C and a natural source of Vitamin E.  These two vitamins are known as antioxidants.

What are free radicals?

Free radicals are chemical species with one or more unpaired electrons in their outer orbit that makes them highly reactive. Exercise produces an increase in oxygen consumption in response to the muscle's use of oxygen to provide energy in the form of ATP (adenosine triphosphate). As oxygen use increases, so does the production of free radicals. There is concern that the increase in free radicals generated during strenuous exercise may exceed the body's natural antioxidant defence system.

RAW Pre-Workout™ contains the electrolytes Sodium, Potassium, Chloride and Magnesium. Electrolytes are present in sports drinks to support hydration levels and to ensure adequate muscle function.  A drop in levels can be detrimental to performance.